The E3 EA Conference 2018 was very much muted this year. Not a whole lot of things we haven’t seen. The whole delivery here appeared to be based around making as little fuss or promise as possible, while still trying to show off the newest games

First up, a weird AR look at anthem as Characters leap off the stage and into the audience.

Andrea Rene is hosting, the event.

Kick off with BF5 Multiplayer. 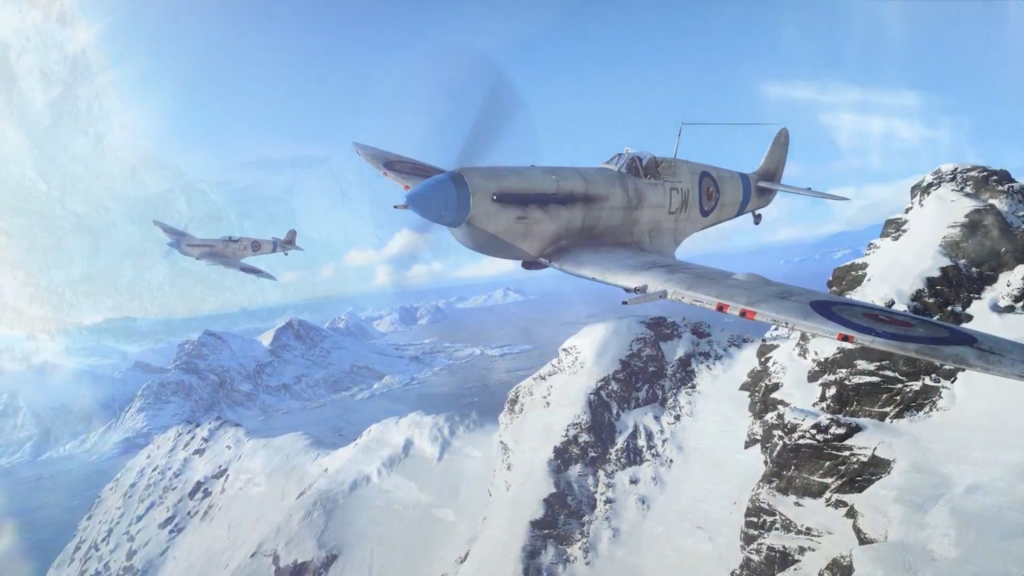 Started with a montage of custom player characters.

Dive and smash through windows, mobile AA defences, while occupied.

Customisability is for gameplay and looks.

No loot boxes, no premium pass. Woops from audience. 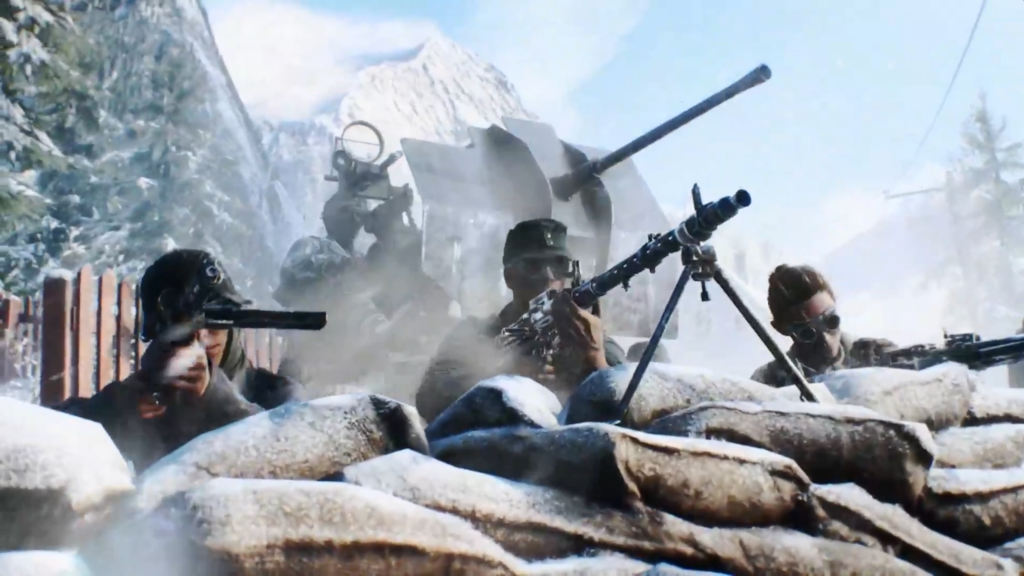 Battlefield Royale mode. Reimagined for battlefield. Destruction, vehicles and team play as core focus. What a massive surprise, that no one predicted.

Later this year to talk about it.

Grand Operations as the main focus here at e3.

Champions Rise as the tag line. UEFA champions league trophy on stage. It will be featured in FIFA now. 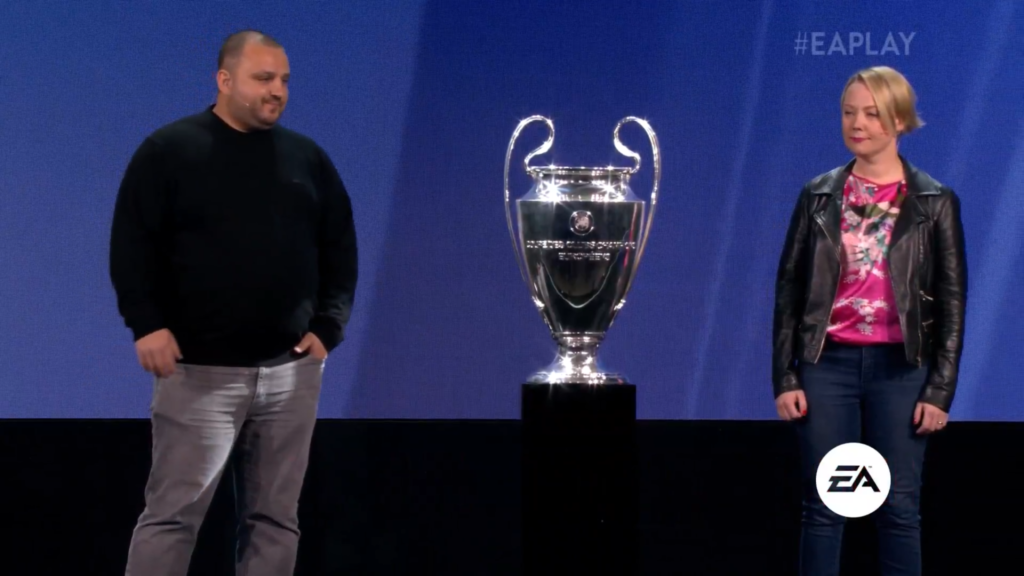 World Cup Content for FIFA 18. Free world cup experience across the board. FIFA 18 complete is now on free trial on Origin Access, Xbox One and PS4.

Andrew Wilson takes the stage now, welcoming us again. Wants us to think about streaming and subscription as a disruption to entertainment. Cloud gaming seemingly the focus here. Images of multiple games streaming at full HD on phones/laptops etc

Origin Access Premier as a new tier of subscription. Confirms new games will be accessible on launch, in addition to the vault.

Seems to be a take on Xboxes gamepass for subscription instead of purchases.

Vince Zampella being interviewed by Andrea now, Respawn are working on a bunch of stuff, wanted to tease their Star Wars game.

Playing a Jedi, with lightsabers.

Takes place when Jedi are being hunted, during the gap between 3+4. Aiming for Holiday 2019.

Dice on stage saying that they “Didn’t quite get it right”. Talking about overhauling the game.

Battlefront 2 getting clone Wars content this year. Starting on Geonosis, with multiple levels, including the largest ever built for Battlefront.

EA and Dice reaffirm their commitment, and say they want to make it better.

Unravel Two shows Yarny on a ship, then lost overboard. Everything from first game is lost.

Second Yarny found, sharing a yarn connection with the first one.   the game being based around second chances and fresh starts. Inspired by optimism.

Can be played in co-op, but always features both characters. “CO-OP with yourself essential” 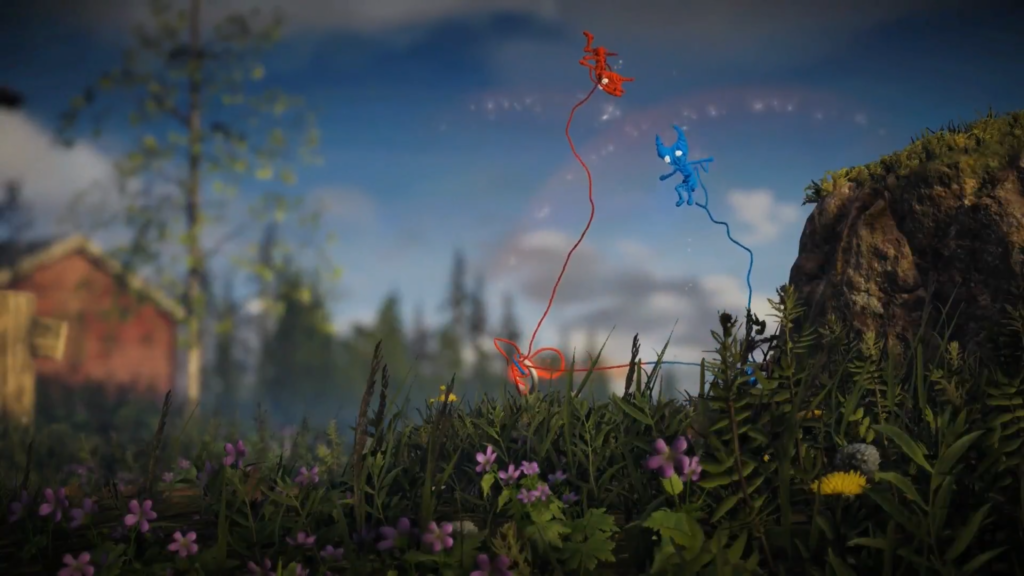 Themewise is a lot more playful.

Game footage showing platforming, player can switch back and forth between both Yarnys to solve puzzles. Swinging on another player from platform to platform. All about swinging and grappling in what they showed. Very cute, as the first one was.

Ending with a trailer. Lots of very pretty environments.

Unravel Two is out right now. Like actually RIGHT NOW.

EA originals being talked about now, talking about Hazelight and A Way Out as something fresh and new.

Sea of Solitude or SoS. 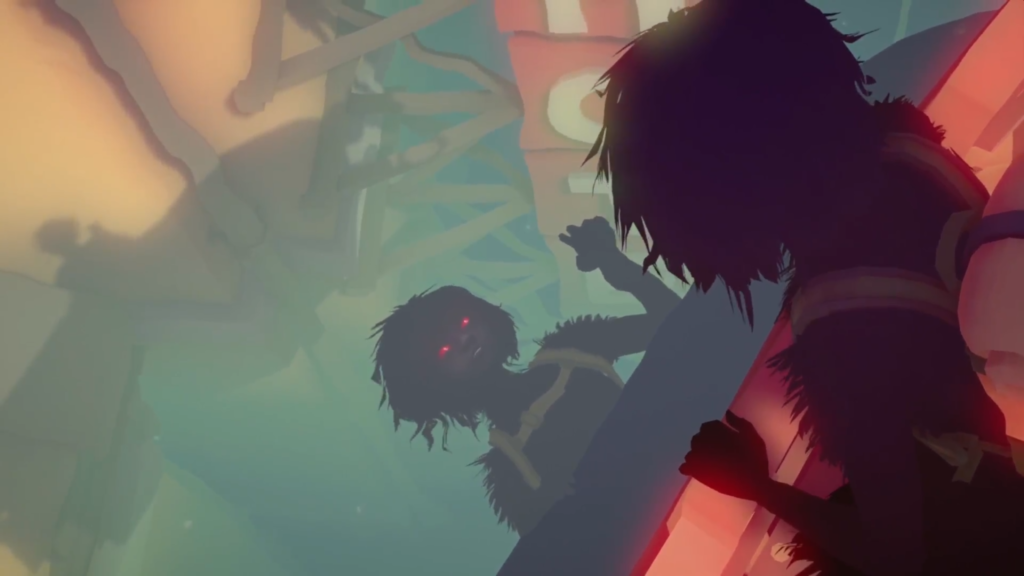 When humans get too lonely, they become monsters. This game is all about Loneliness, where the lead Dev worked out their issues while working on the game. Apparently it connects with people really easily.

Young woman named Kay, suffering from such strong loneliness that her negative emotions take her over. The game is about finding out why, but also turning her back, and balancing her emotions and self doubt in a human way.

Teaser showing many stadiums and teams of all varieties.

Focus on a Madden esports guy who I suspect I’m meant to know, but don’t. This Champion is now on stage with player from Pittsburgh team.

Redwood Studios head and a man describing himself as a professional shoutcaster now talking over a head to head multiplayer Mobile game.

They aren’t telling us the name right now, which is always worrying.

Competitive mobile gaming some how looks even less impressive than competitive other gaming.

It looks like a perfectly fine mobile strategy game. Aim is to destroy the opponents base, there’s a big capturable missile in the middle which can take off half the opponents health.

This is Command and Conquer Rivals.

Then we see a cinematic cgi Trailer.

Wilson now back talking about player investment, and making sure everything is worth the players time. Talks about reducing grind, power of the community to give back.

EA Play to Give, ended up giving 1 million dollars to 3 charities based around inclusion, anti  bullying and the like.

Deep Dive at Anthem as a closer for the show.

Anthem is all that remains of former civilsation. 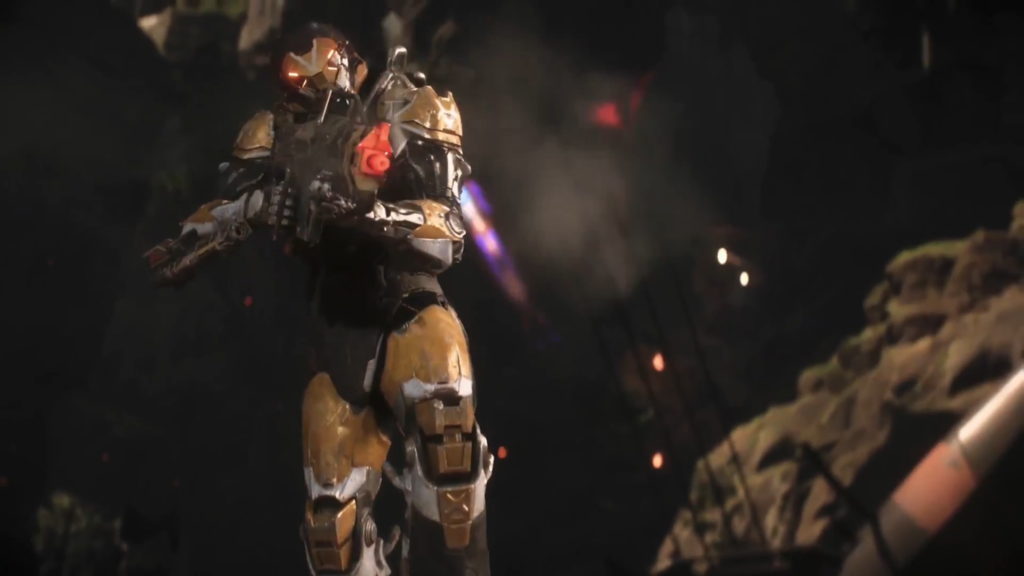 Time for talk to the Devs.

Anthem has been in development since before Casey Hudson left.

Wanted to make a world for people to discover, but also dynamically changing and multiplayer as an option.

Story for Bioware is about characters and making the story feel about the player.

“Our world, my story”. In the open world, it is living and shared, everything from weather and the like is shared with all players.

After missions, go back to base which is a single player experience. Game is designed around the idea that players always want more story from Bioware games when they’re done, Anthem is built to work that in.

Premise of Anthem is world left unfinished by the God’s, where the tools they left behind mess with the world. This messes with people/buildings/weather. Armoured suits necessary to get around.

Lot of flying footage. Not a lot else so far.

This interview structure is very measured, very specific. But the repeating footage and shots of concept art are just not engaging enough to last through this.

Player is a freelancer, skilled in flying the powered suits. The Dominion are the bad guys, aiming to weaponise the Anthem

Javelin classes of Mech are as follows: 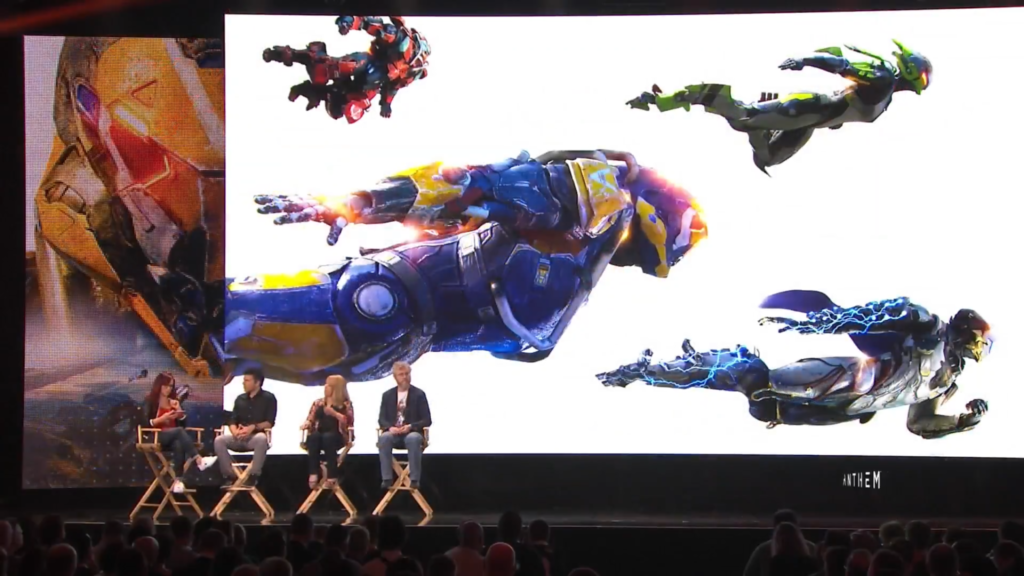 Allows for a lot of different choices.

Colossus is a big bruiser.

Storm is clearly a mage.

Customisation options for a bunch of stuff, not just painting your suit, but modifying the geometry. Fun teaser shots of Dragon age and

Query about monetisation. Vanities and Cosmetics are purchasable. No paying for gameplay advantage, no loot boxes.

Base fun is the idea of getting a bunch of friends together to be Superheroes.

Story is going to be tougher for solo player, as they’ve tried to balance it for co-op players.

Colossus seen clearing mines for rest of the team to follow behind.

Footage from last year is exactly the same here. 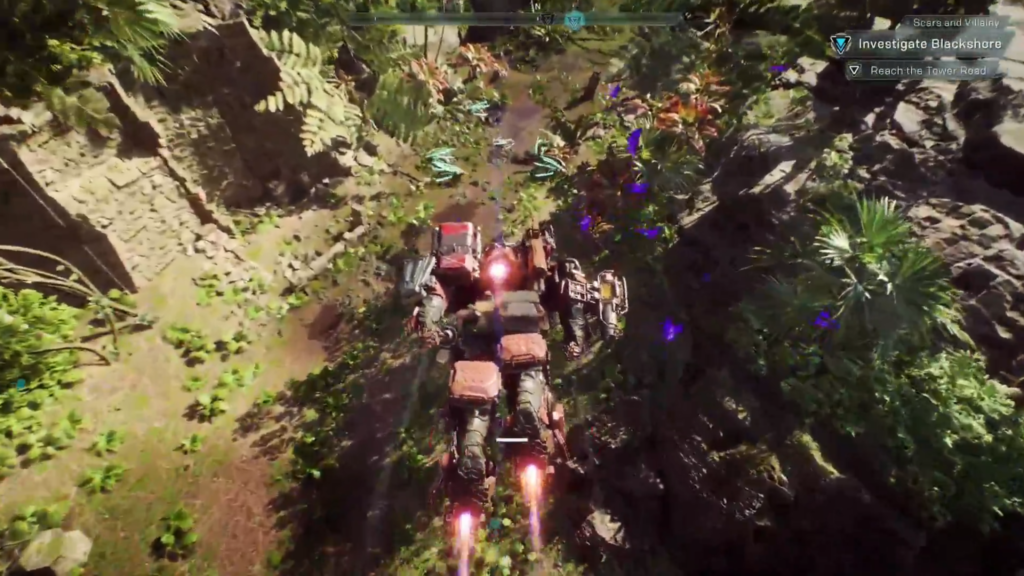 Detailed, high textured open world stuff, lots of colour and light. Technically this looks great. But there’s not a whole lot else.

Ending by talking about the current stuff. So Fifa 18 is on demo right now, Origin Access is free to use on a trial, Command and Conquer Rivals Alpha is on Android now.
Thus ends the EA Conference 2018. With a whimper all the way through.