Thomas was Alone is a short, indie puzzle platforming game created by Mike Bithell as a browser game in 2010, and then again on PC/OSX in 2012. Since then it’s been ported to almost every system available. So why are people so willing to buy and rebuy this game after so many years?
And Why do we recommend it?

Thomas Was Alone is a game with charm oozing out of it from every surface. It’s the video game equivalent of comfort food, and it’s one of the first games I’ll boot up when on a new PC.

In terms of story, Thomas is a piece of errant AI in a computer system, taking the form of a red rectangle on a 2D plane. He’s exploring the world, always moving and jumping up and to the right. He has left his protocol behind, developed a curious personality, and trying to see what he can find in the mainframe. Along the way, he meets a host of friends, each with their own specific twist on jumping and moving, as well as their own personality.
There’s Claire. She’s a big blue square who doesn’t jump so well, but her unique floating abilities lend credence to her desire to be a superhero.

There’s John, who is an incredibly tall rectangle and athletic, and so jumps really high. He loves showing off.

Then there’s Chris. Chris is a small, orange square. He can’t jump very high. He’s more than a bit cynical about Thomas and the whole endeavour. But he comes along on the adventure anyway.

There’s so many more with all being excellent depictions of character tropes, conveyed through their mechanical design and accompanying narration of their story. 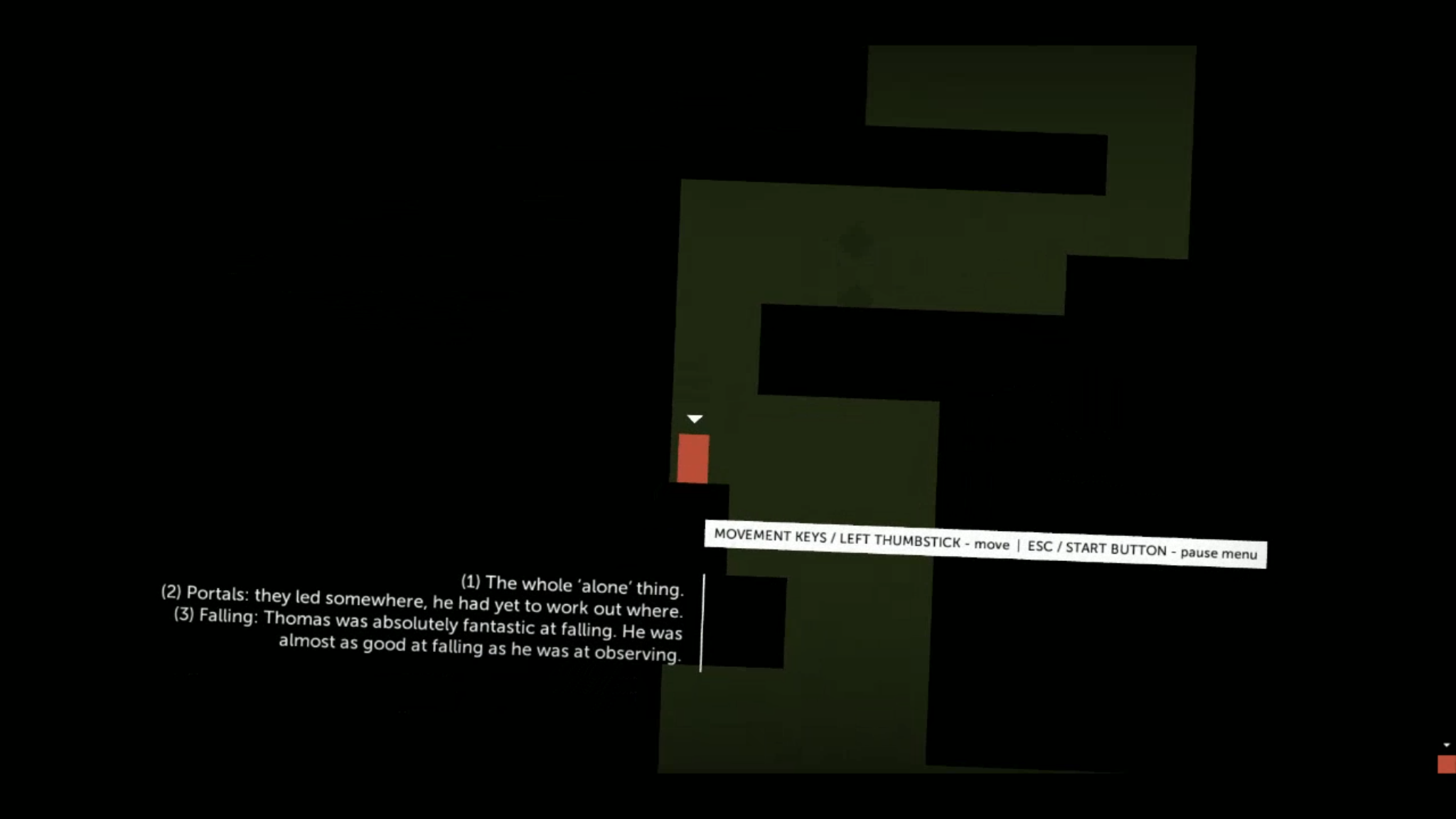 The object of each level of the game is to use each of the character’s abilities to traverse the puzzles of the environment. So using the characters above, Claire will fill a gap in the water that’s too far for Chris and Thomas to jump across. Then John will hit a switch that’s too high for the others to reach. Then all the shapes will come together to form a staircase to allow Chris to reach a new platform.
By doing so, the characters can reach their exit points, and continue onwards in their quest for curiosity.
The gameplay is excellent, with tightly attuned jumping mechanics and puzzles that are tricky but not overly hard. More than that though, the gameplay helps reinforce the main theme of the game. Friendship.

Thomas Was Alone is an important title for understanding the game. It’s among the first spoken words in the witty and utterly mesmerising (BAFTA winning) narration of the story by Danny Wallace. But that “Was” is the past tense. Thomas may have been alone, but Thomas finds friends. He goes on adventures. While his friends may not always have abilities that suit their current situation, by working together, and helping each other, they always reach their goal. 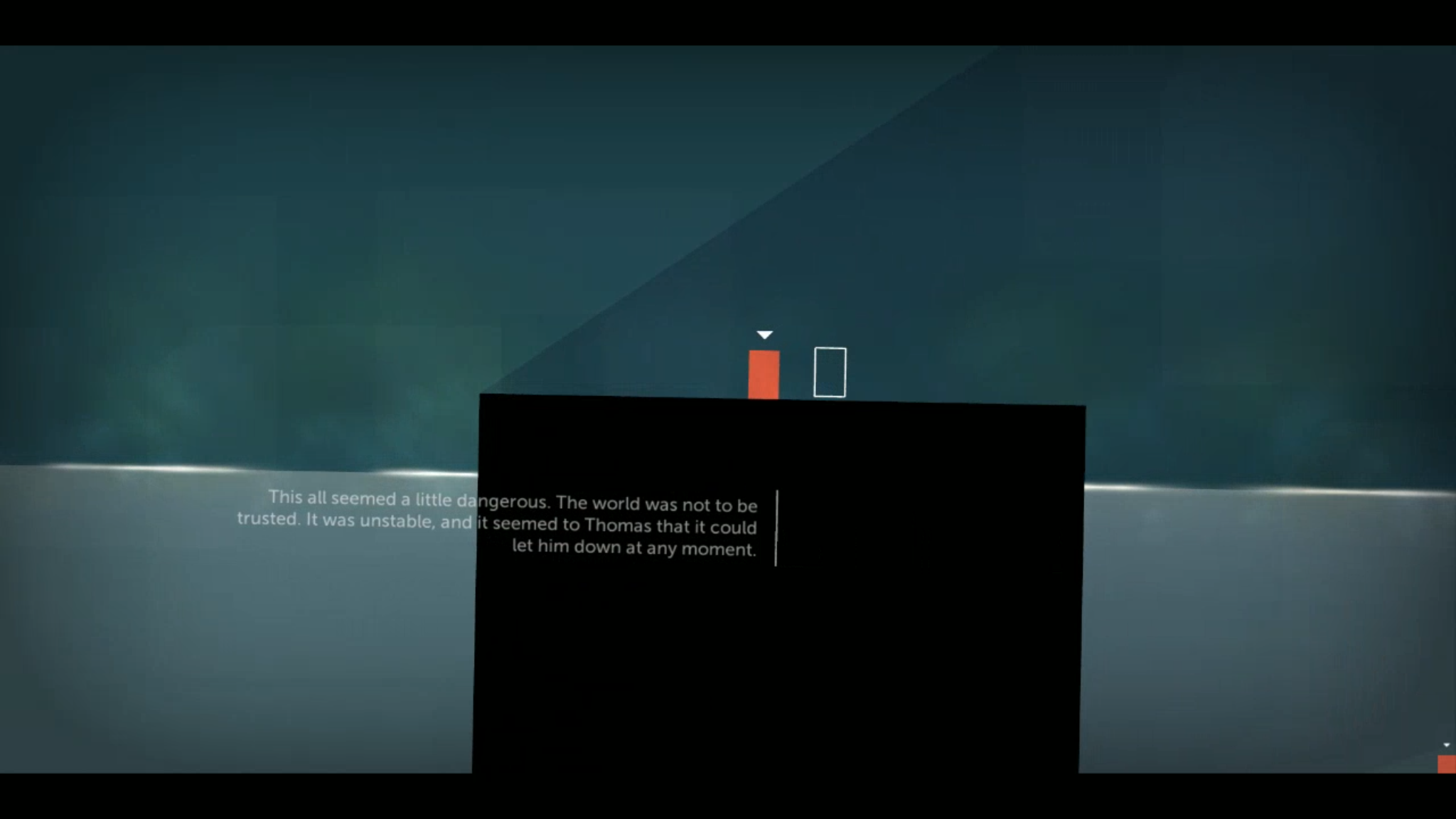 Thomas Was Alone is not just a mechanically well crafted game. It’s not just a game with a surprisingly affecting story. It’s a game to recommend because it’s both of those things, with each aspect reinforcing the other. At a four to five hour runtime, it hardly outstays its’ welcome and is perfect for those lazy days where all you need is a pleasant game to play.

The game is available on: (Deep Breath) PC, OSX, Linux, PS3, PSVita, iOS, Android, Xbox One, PS4 and WiiU. And relatively cheap on almost all of them.