PUBG as a game shouldn’t work. It’s a multiplayer only game that requires around 100 players for a match. It looks bland as white rice. There’s fundamentally no narrative, no story. To start a game is to commit to a single 30 minute time sink where 99 players are going to lose. This game should have empty servers, critical panning and a bunch of postmortems to dissect exactly how bad of an idea it is.

Yet it’s easily one of the most engrossing games I’ve played in a long time. Somehow PUBG is a highly compelling game that’s sucked up most of my year.

PUBG is simple. Based loosely on the film, Battle Royale, 100 people will be dropped into an arena. Players play in a third or first person view as they move around. This arena is about 4km wide. Guns, ammo, vehicles and gear are scattered around the map to draw players to engagement zones and conflict.

After a few minutes, a large circle will be marked on the map. After another few minutes, a wall of blue energy will encroach upon that new area. Anyone who remains on the wrong side of the blue wall will take damage. The circle and wall process will repeat, in a steadily shortening span of time, until there’s only a metre or so of space left.
99,98,97 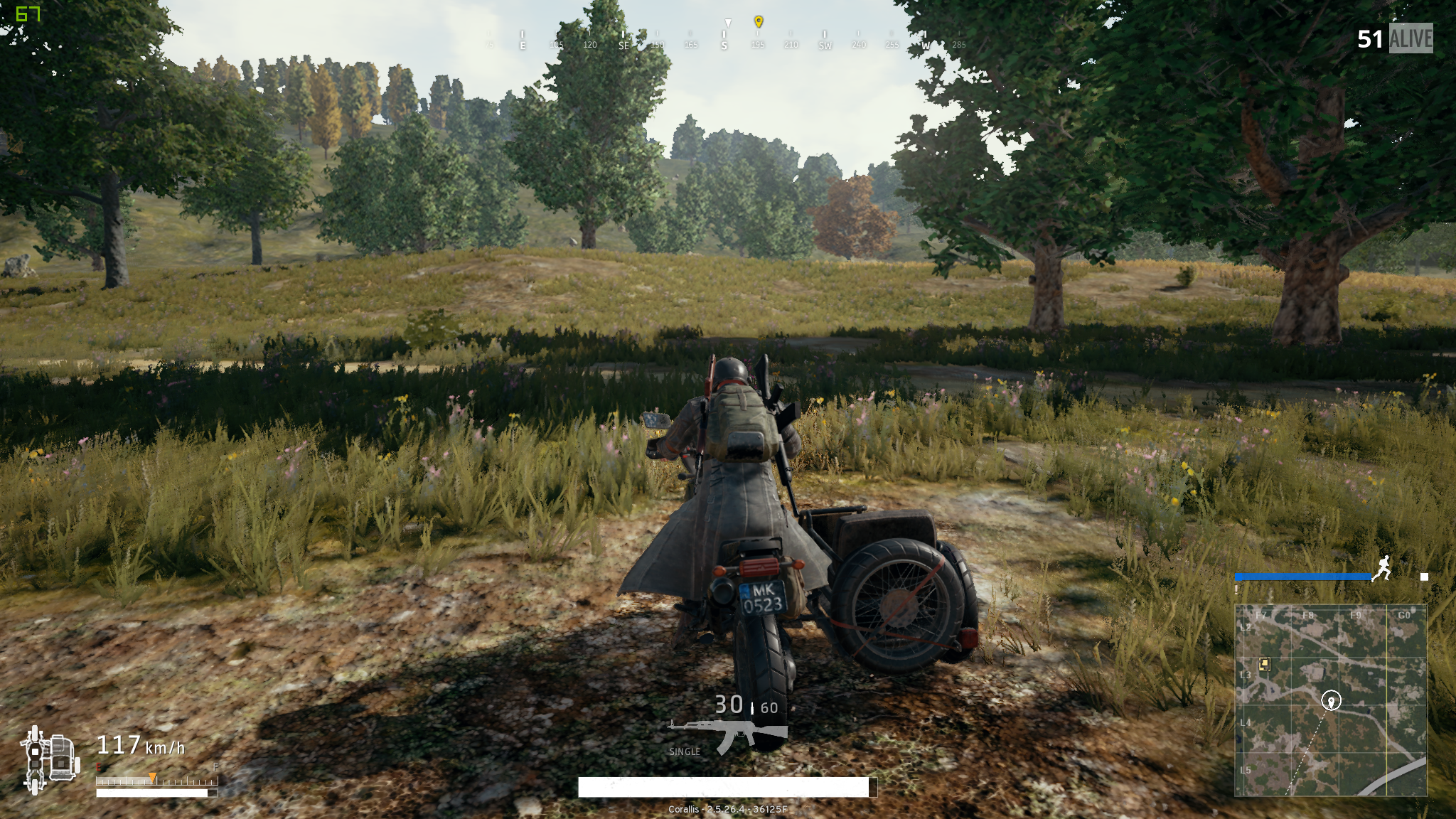 At some point in the 30 minutes or so that the game takes to shrink the play area to that final circle, you will probably encounter another player. What will likely happen next is that one of you will be shot.
71,70,69

Often these encounters are short, loud and one sided. Many of my deaths have come from missing a person in a room. Or not scanning a treeline well enough. Or accidentally poking my head up above a wall. From there, a full replay of the last few moments are presented, showing the player what their opponent heard and saw to allow them to get the kill.  Then it’s a few moments to load the main menu and join a new game.
56,55,54

Every so often, it’s a fight you win. You end up getting the drop on an unsuspecting foe. Occasionally you just straight up out shoot someone in a firefight.
Regardless, any time the player can fight back is one of the most tense and thrilling experiences.
Theres a cacophony of noise as bullets sail past heads and ping and clatter around. Scrabbling for cover behind vehicles, through doors and windows. Surviving is often a thrill in and of itself as you pick over your opponents dropped loot and worry if other opponents will be drawn to the sound of the firefight.
13,12,11

In very rare occasions, you’ll make the final ten. At this point, the play area is tiny, only a few hundred metres across. Players will be ensconced in bushes and behind trees, peeking out to catch a glimpse of their opponents.  The numbers drop and the in game kill count drops. 4,3,2.

Finally, it’s just you and your opponent. The tension is unbearable. Who was more lucky with their gear scavenging? Who can hold their nerve long enough not to reveal themselves?
There’s a short, sharp shot. The win screen fades in, the now memetic catchphrase, “Winner Winner Chicken Dinner” flashes up.
100 people started this game. You outplayed them, outfought them, out-lucked them. It’s a palpable sense of relief and exhilaration that few games can match. 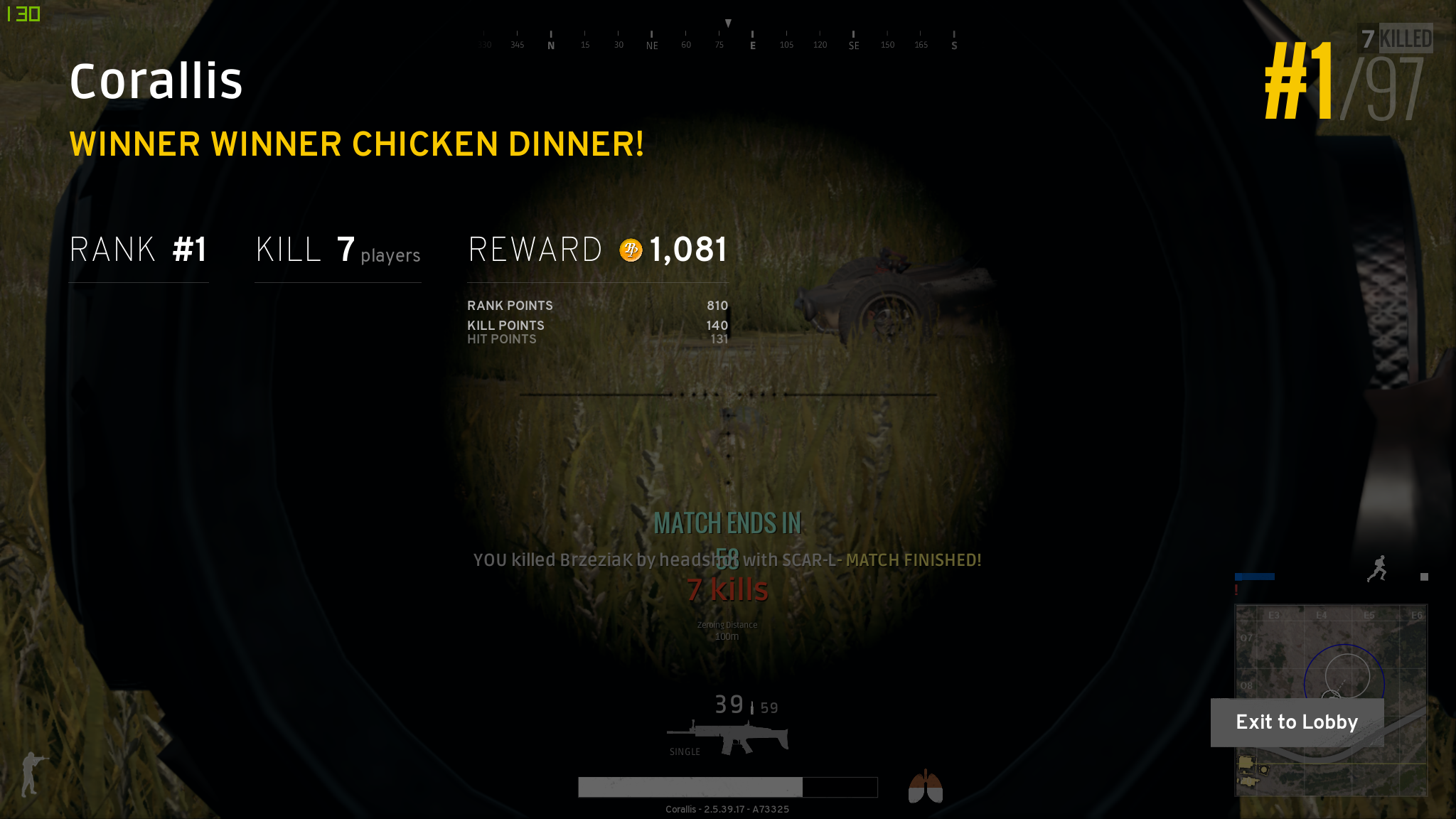 That emotional payoff is something that PUBG does incredibly well. As I said, Death is sudden and constant. A match can be lost within minutes of starting as players brawl for gear. The replay system is invaluable as the match goes on. With such a massive map, and such a wide range of weapons and scenarios, there’s a near infinite amount of scenarios that can result in death. Being able to play back your final moments does a great job of justifying a seemingly unfair death. It’s especially important because there will be 99 losers over the thirty minutes.

The game contextualises this loss in an important way. It’s not, “you died”, it’s “Better Luck Next Time”. The short downtime between one match ending and another restarting work like this as well. It’s a matter of three/four clicks and a couple of minutes to get back into a game from the start. It makes learning the game straightforward, while the repetitive losses make the payoff of a win somehow so much more satisfying.

In terms of learning the options, the majority of this is in the maps. At launch for PUBG, there are two with at least one more promised. Erangel, a map inspired by the Arma roots of the series, sees Soviet military installations and blocky architecture. There’s rolling hills and forests on the island with a network of corn fields connecting varying sizes of urban areas.
By contrast, Miramar is a South American inspired desert, filled with steep cliffs, sprawling cities and wide deserts. The uneven terrain is difficult to traverse, so players wanting to go quickly must use the open roads.
The playstyles in both are a little different, with Miramar even having unique weapons and vehicles. The forests and fields of Erangel encourage players to snipe from a distance and hide in buildings within the zone for close quarters action.

By contrast, Miramar seems to have a little bit of a movement focused gameplay style. There’s wide open spaces, but undulating hills make vehicle movement difficult unless you take the roads. The sharing of roads themselves give rise to mad Max style car chases as players battle to reach the zone. 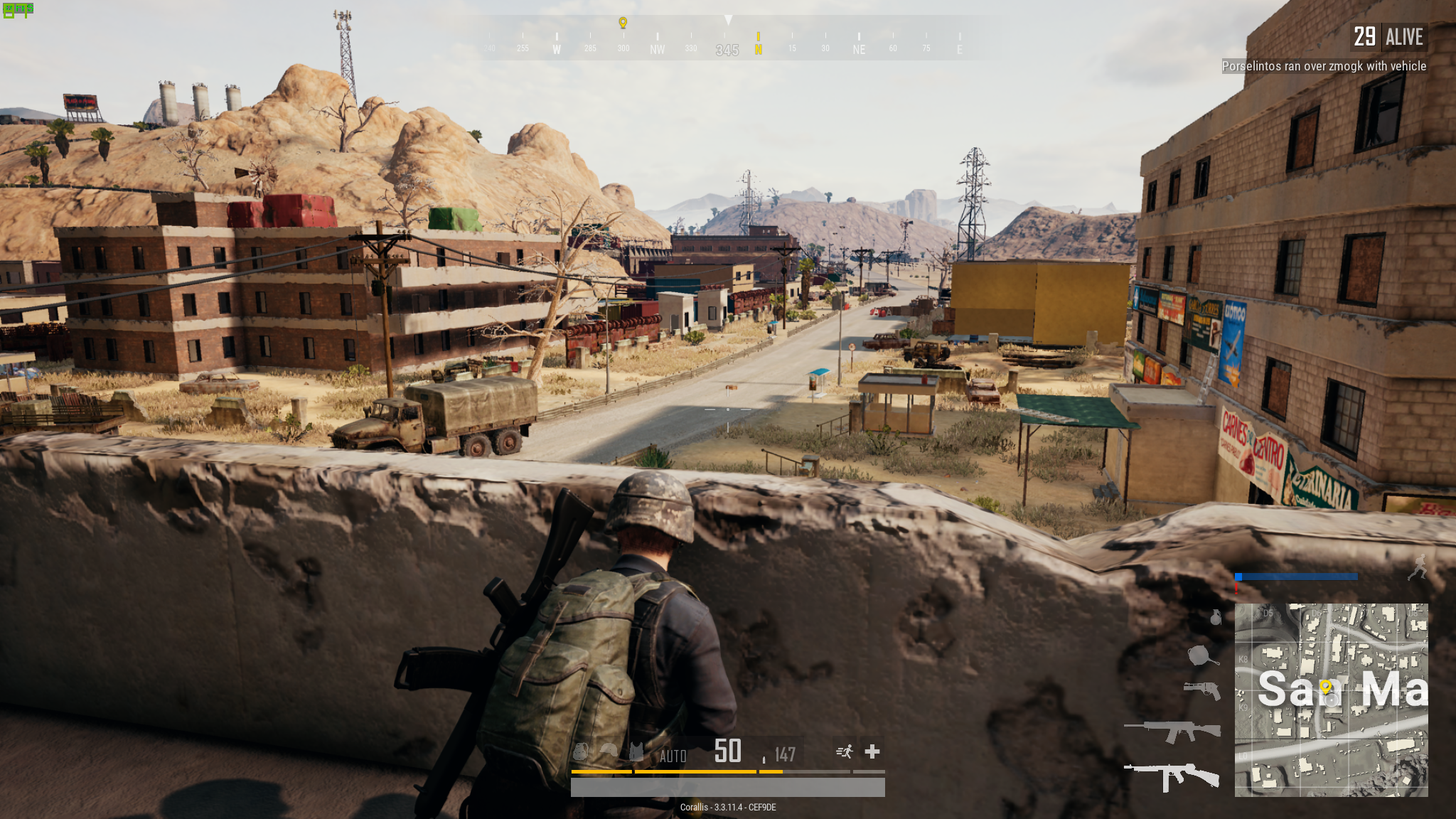 Each of PUBG’s maps is huge, and depending on the Landing Zone at the start of the game, can mean whole areas of the map are completely out of play. This results in a constantly changing play environment from match to match. So with two maps each with four weather conditions, on a map that changes every time you play, there’s a tonne of variety to work with as you play.

None of that would matter though without the actual gameplay being fun.  Movement in PUBG is surprisingly fluid, with the vaulting system providing a system that supports a game where a player might have to chase the play area for most of their match.

The inventory and upgrade system are key to all of this. Every match, a player starts off with only the clothes on their back. Literally everything else must be scavenged from the map as items are randomly scattered.
Finding a gun will generally mean finding a few bullets nearby, which will have to be loaded. Attachments for those weapons will probably be miles away. Health items and armour might be elsewhere again. There’s potential for even the most amazing player to be screwed by probability. It’s a surprisingly efficient balancer of skill.  It also provides a nice way for players to mark their progress even if they don’t win. Each item looted is a moment closer to a victory, in theory. 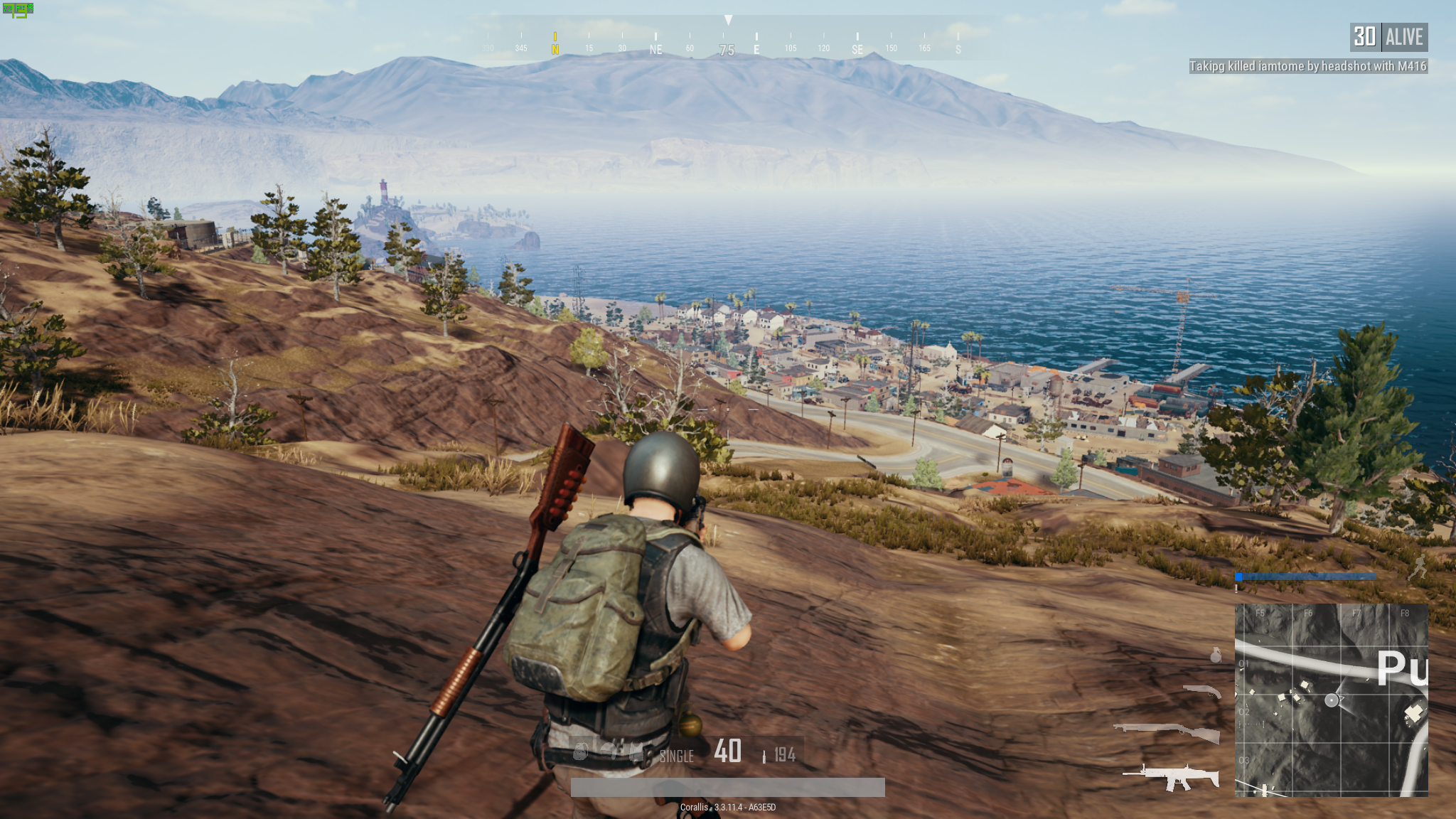 My absolute favourite feature is the sound design though. After a couple of matches getting used to the surround sound audio, it’s possible to identify who was shooting, what they were shooting, and whether they hit anything by sound alone. There’s a joy in knowing that the crack of a sniper rifle in the far distance is aimed in a different direction to you. Similarly, the sound of a stream of bullets hitting dirt around you is entirely different to the sound of them impacting inside a player.