On a boat, off the coast of Dubrovnik, there is an alien. First contact for humanity is beginning. It’s up to the player to decide what happens next.

The newest game from Bithell Games is a more complex and interesting Text Adventure than you initially might think.

Quarantine Circular is a short, self contained sci Fi adventure that asks the players how they would respond to a being from the stars appearing.

It’s a follow up to last year’s Subspace Circular. Again, this is a text adventure, played by advancing through an ongoing conversation and selecting the appropriate responses to uncover the full story.

Where this game differs is the way in which these conversations unfold for the players. As the story progresses in Quarantine Circular, the character currently conversing can change. This results in a fractured storyline, where characters drift in and out of the narrative. This allows the story to flow fluidly. As opposed to finding the correct answer, this game is about finding the answer the player thinks is appropriate.

The changes in character for the game result in a much less linear story than Subspace Circular. That game, and many other text adventures, have a tendency to result in spiralling conversations until the right answer is selected. This is still sometimes a feature of the text chat in the game, but it manages to perform adequately in making the conversations feel natural. 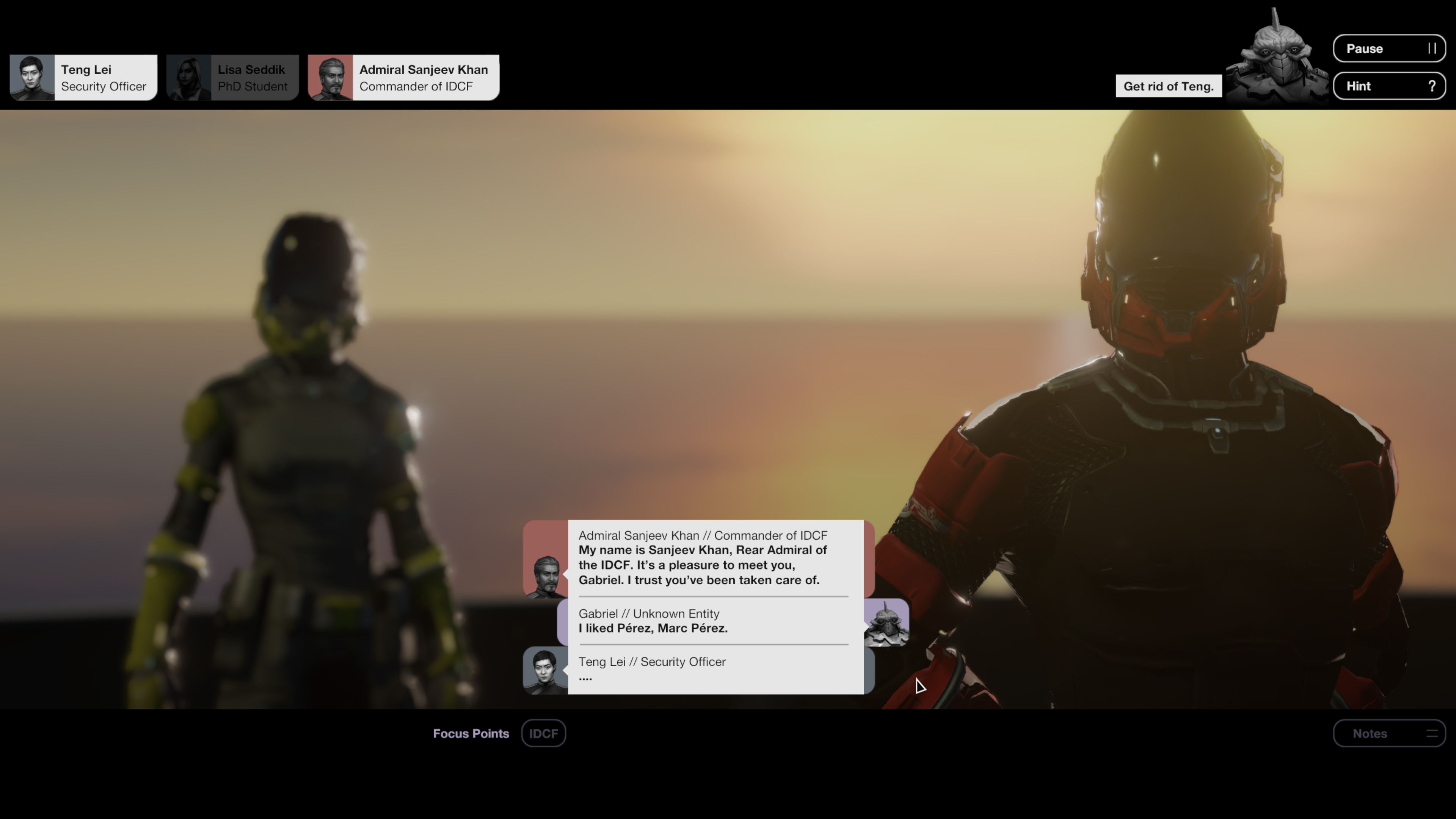 The art style is pleasant, with the main chat interface forming a chat log in the centre of the screen. Generally this results in the participants of the conversation appearing on either side.
Those participants are of the mid level Sci Fi style. Bodysuits, bright highlights and glossy helmets. It’s a very utilitarian view of the future which fits with the world the game hints at.

On top of the screen, the active participants in the given scenario are listed in tabs. Every so often, a progress bar will appear above one of them as the player tries to convince them. These tend to be straightforward, finding the right conversation steps to progress the puzzle.

Speaking of puzzles, as with Subspace Circular, this game does feature at least one puzzle which may require a pen and paper to solve. It’s a little immersion breaking to have to divide the attention from the screen, but mostly fits the narrative structure well enough. 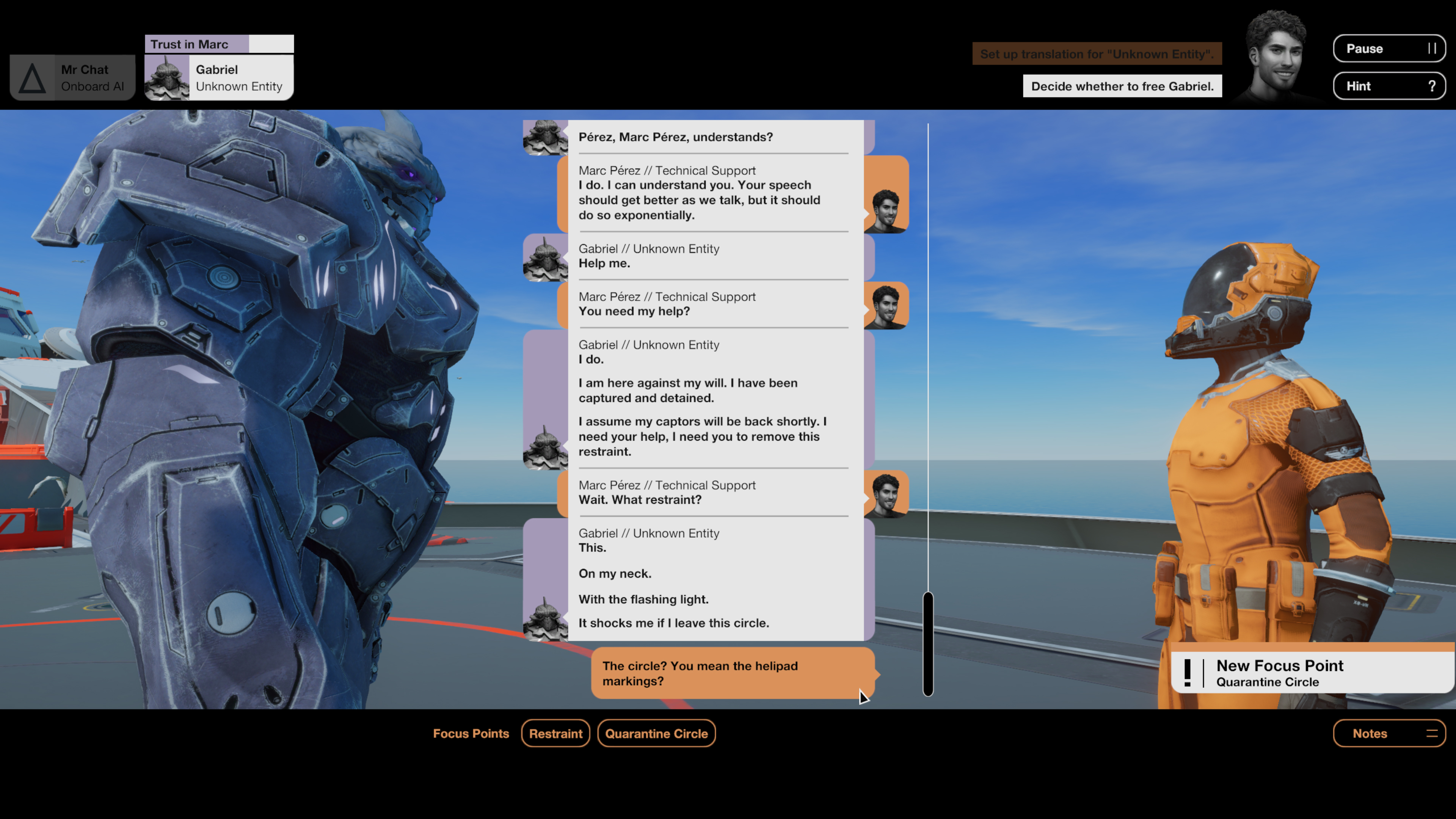 These viewpoints help the game as it develops into a more classical sci fi narrative. The themes of the story are very heavily influenced by classical arguments of the needs of the one vs the needs of the many, as well as whether benevolence towards what humanity doesn’t understand is worth it.
To the game’s credit, as part of all this, it often deals quite bluntly in specific medical and scientific terms. It does this mostly without necessarily speaking down to the player. As science fiction, the game balances the reality behind the setting with the fictional potential in an entertaining and convincing way.

Where Quarantine Circular stands out though is in the fact that this adventure has multiple endings. The flexibility provided by the cast of characters allows for a certain amount of role playing. As opposed to binary choices of how the game can end, decisions mount up, leading to a meaningful finale.

As such, there’s quite a lot of story for a game that costs under five pounds and touts the ability to be completed in one sitting. How could you not be interested?