To put it bluntly, the opening episodes of Walking Dead Season 3 do not inspire confidence in the rest of the season. There’s structural problems, story issues, a really weird sense of camera direction and some odd graphical problems.

By now, Telltale’s Walking Dead series has a reputation. There’s good parts, like the first season’s (for the time) excellent narrative and ability to tug on heartstrings with the choices system. There’s also terrible parts, like the second season’s reliance on unrelenting solemnity and shock, and the fact that by now, after using the choices system in so many other games, it’s transparent to the player. Season Three does very little to move on from this.

The engine has been given a new coat of paint, even if load times run a bit long, and the textures and models sometimes don’t populate as correctly as they should. The facial models seem a whole lot more realistic. On some characters this works, letting them really emote and supplementing the dialogue perfectly. On some, there’s a hideous uncanny valley effect that results in terrible lip syncing and a general air of horror.

The style is still pretty as ever, thick black outlines on objects offering a good break up for the fairly realistic (drab) colour scheme. In terms of voice work, it’s fine. No complaints, nothing particularly stellar either though. Credit where it’s due, they’ve very clearly tried to do something different with the camera work in the non controlled sections. You’ve got television style panning and zooms to add variety and give the player some dynamism in scenes they aren’t necessarily involved in. It’s not perfect, but it’s a reasonable approach to improving some very static segments.

The story is predictable. Incredibly so, with the story beats apparent almost from the offset. You play Javier, a disgraced but charming baseball player who has survived with his niece, nephew and their step-mum in a travelling van since the start of the outbreak. They initially seem fairly competent, with solid plans and a good group dynamic. You’ve got the positive tween girl, the moody older teenage boy, and a youngish stepmum who has hints of rebellion under her put upon wife background. This would be a fine place to go from, with the early dynamic being clear and accessible. But, the game has a horrible reliance on flashbacks and jumping narratives. It starts pre-outbreak, again, so new players can catch up on the idea of Zombies. Then you get flashbacks to decisions to set the tone for how you’re meant to interact with your family and how they think of you. It feels haphazard at best. 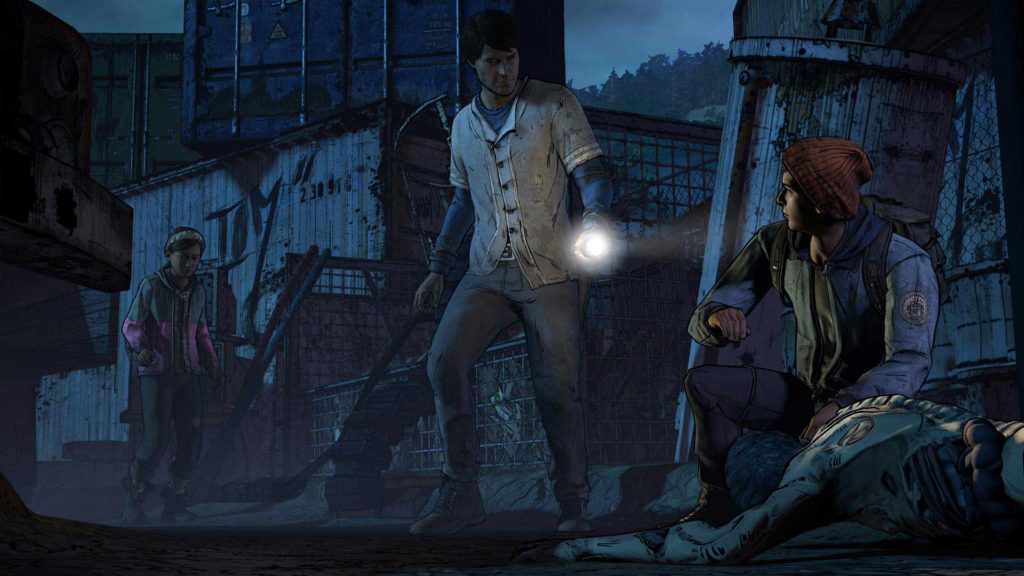 Clementine is not the player character, except when she is, in all too brief vignettes which explain the time skip to season three. You encounter a whole host of characters, far too many without being developed. And those that are developed are given just enough rope so that you have a twinge of emotion when they inevitably die. There’s very little that’s compelling about being told a character will remember your actions when they’re visibly marked for death by their role in the story. Even at that, the characters are somehow rote and one note throughout. It’s hard to care.

The worst of this is what has happened to Clementine. Two games worth of nostalgia and investment means I can’t interact with her in anything less than rose tinged goggles. Yet even with that in mind, her dialogue is trite, vague and pointlessly cryptic. This game is marketed as The New Frontier. Not Season Three. This game is supposedly a jumping on point for new players, going so far as to have a save builder if you’ve skipped the original games. Having Clementine be a character who clearly functions as a mysterious badass with cryptic references to their past might be something that boosts earlier game sales from curiosity, but it comes off as boring and frustrating writing here. 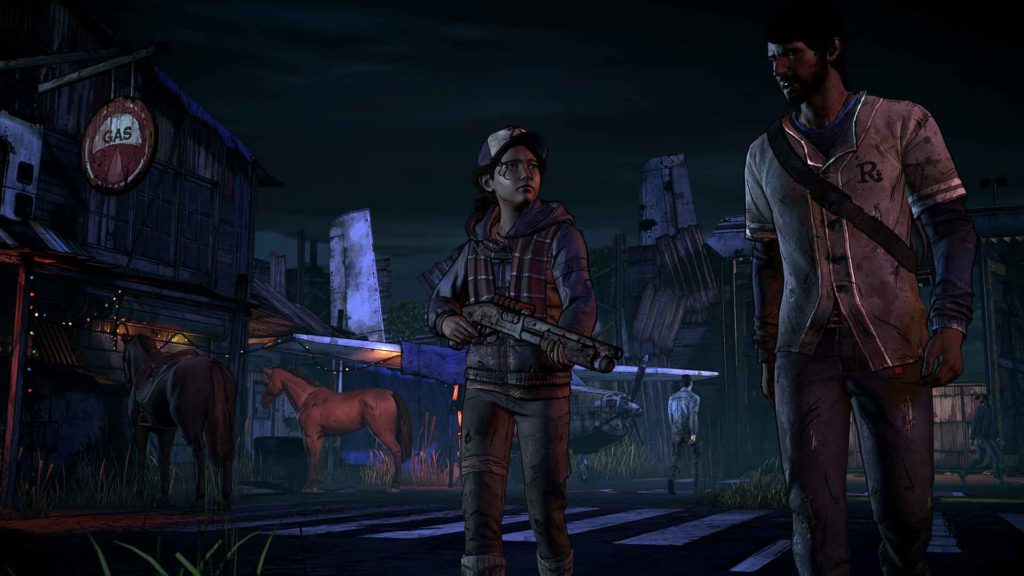 Some of the other character choices are utterly bizarre. There’s a character, Tripp, a big friendly guy in charge of a town of people, who is clearly meant to be a more reasonable analogue for Kenny from the early seasons, which makes sense from a story standpoint.

I really wish I was making that up.

The only saving grace is that one of the villainous characters (and there’s a reasonable amount this time) seems to actually have a conflict going on in terms of motivation. It’s one of the few little dashes of hope I have for the rest of the series.

There’s an initial suggestion that the story is going to feature more levity, and have more of a focus on developing the characters and locations. Then episode one reaches its climax, episode two starts and the game narrative just collapses into a wave of misery and depression topped off with cliches. It’s just the same tired narrative that the story has followed in the games and TV series. Good group gathers in stronghold. Things are okay. Bad group creates conflict due to actions of one or two members, good group has to decide to remain good people or lower themselves.

Going back to the previous problem, Clementine’s presence in the story is a massive stumbling block. The game constantly presents choices to stick with Clementine or side against her. For players who’ve gone through the initial seasons, there’s barely any reason to hesitate. For players who haven’t, she’s clearly an important character who the game is putting a heavy focus on. A good 90% of players stick by her according to the community choice tallies that end each chapter. Why wouldn’t they? The impression seems to be that by taking control away, not immediately explaining what happened to her in the time skip, and deliberately obscuring things from the player, the game can suggest there’s a whole secret backstory to cause distrust. 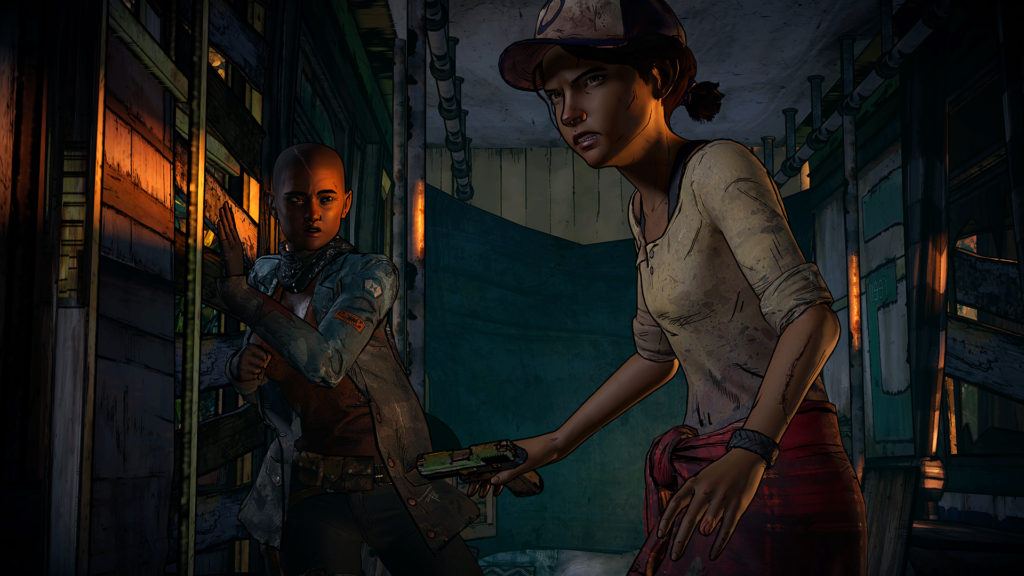 Which is weird, because I’m pretty sure I played her backstory in season one and two. She was a sweet, unassuming kid who went through unimaginable pain, and had to become hardened to that, but (with me) still showing that she’d mostly stayed good. But now she has a whole series of events that have happened during a time skip, and this ends up being again, obvious and predictable.

My only concession to the story is that, as this is The Walking Dead, I’m pretty sure she might die later in the series for dramatic effect, but even so, it hardly feels like it will happen in episode one or two. There’s no stakes here. I don’t need characters to die to have meaning, the opposite is true. The player gets no build up of relationships with characters to give anything meaning. I can’t care about the new side characters, especially when compared to Clem, and she feels like a stranger here. It’s incredibly frustrating.

The gameplay has never been the foremost reason to play this series, but it’s even more dire here. I had my controller sitting on my lap for most of the game. The dialogue sections were standard fare enough, timed choices of dialogue or deliberately not talking. The remainder is waiting for the next sequence of quick time events for combat, or solving “puzzles” which consist of finding the only object in an environment and applying it to a problem. Compared to other adventure games recently, it’s very basic, and even by the standards of the previous entries in the series, it’s weak.

And finally, I need to talk about how obnoxious the push is to buy DLC. Every time I ended a chapter, I got a screen asking me to buy the Michonne themed mini series, or sign up for a Telltale/Skybound account. I have a sneaking suspicion that if I hadn’t gotten the original series, or 400 Days, I’d be getting even more recommendations.

All in all, it’s hard to recommend this game so far. Episodes Three through Five might be incredibly gripping. Maybe. But since Season One captured everyone’s imagination and started the Telltale fire burning properly, adventure games, and gaming stories in general, have developed.

The Last of Us came out very shortly after season one, and Ellie and Clementine are natural points of comparison as characters.

Life is Strange made the gameplay part of the story, as opposed to just breaking up the dialogue options.

Oxenfree had natural, engaging dialogue and a fun way to interact.

Even something like the new Kings Quest had a whole host of fun work in terms of puzzles and narration. The genre has developed and advanced. There have been five other Telltale Series of varying quality, with a sixth on the way. The Telltale formula is a known thing now.

Unfortunately, The Walking Dead is an example of its own title. Shambling along, trying to survive without changing or adapting. Appropriately, like the TV series and comics that it derives the setting, The Walking Dead: The New Frontier has almost completely lost it’s hope.